One of the most anticipated points of our journey came nearly two weeks from the day we left the East Coast.

The name alone inspires awe, excitement, vast wonder. There was considerable debate as to whether we should stay on the more popular South Rim, or the less known, more remote North Rim. A few valued advisors highly recommended the beauty of the North Rim and since neither Rhyan nor I had ever seen either side, we chose the less populated North Rim, not knowing what to expect but anticipating what we would soon see.

The drive from Sedona to the campsite was one of the most beautiful routes that we’ve taken so far. We highly recommend somehow driving it if you’re even between Sedona and GC. The terrain alternated between vast expanses hemmed by enormous red rock mountains and winding roads skirted by sheer drops. The size and scope of the land was breathtaking. 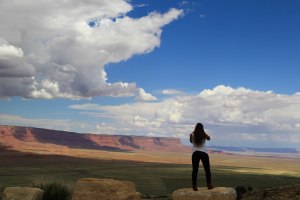 We slowly entered the mountain and wound our way into lush, surprising greenery, tall pines, and birch trees as we headed towards our campground. We set up our new home, nestled in the pines. 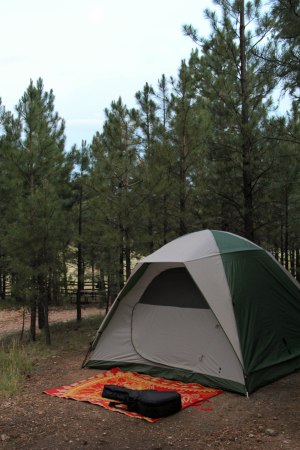 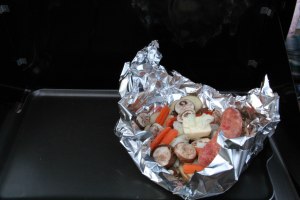 Hobo dinners for our first night ^^^

It was dark by the time we ate, but our little Coleman stovetop (an essential on this trip) was quick and easy to use, and our dinner was delicious! We looked forward to what the next day would bring. 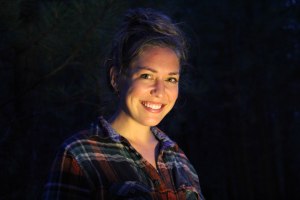 Breakfast the next morning was one of our favorites! Banana Pancakes and a humble pound of bacon. De-lish. 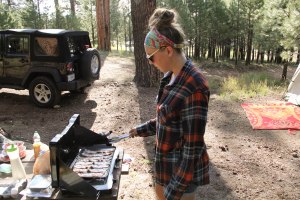 Finally, We made our way to the Grand Canyon and hiked a short ways up to Angel’s Point. It really was an incredible view! We hung around a bit in the area and saw some pretty awesome sights. 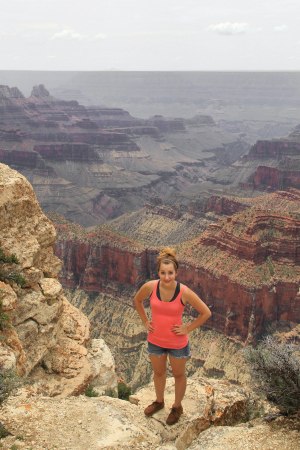 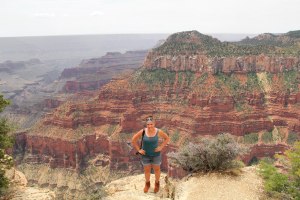 Hands-on-hips is the apparent posture of choice^^^ 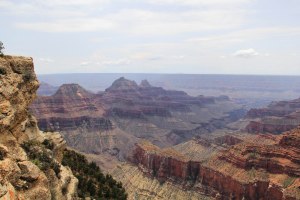 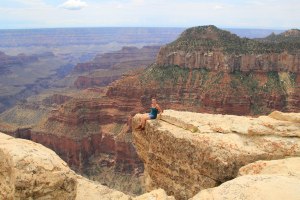 Hanging over the edge ^^^

But we weren’t entirely sold. What we really wanted was to feel surrounded and overwhelmed by the enormity of what we were seeing, to really get our heads around how truly big it was. But that just hadn’t happened yet so we kept searching for the better views. And did we ever find them! 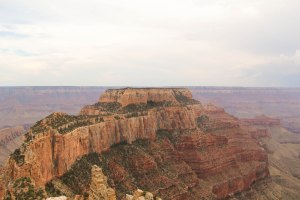 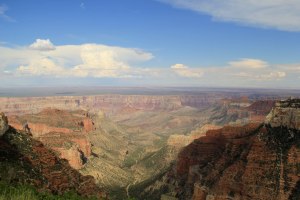 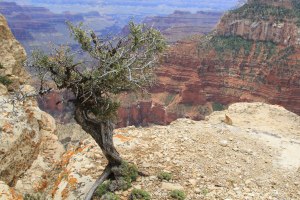 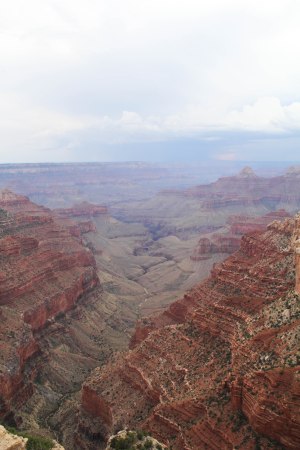 Finally, at the end of the day we drove up to a highly recommended spot called Cape Royal. We brought with us some snacks and a blanket in hopes to camp out a bit and watch the sun set over the canyon. Feeling adventurous* we climbed out over a little railing to a large rock face that hung out in space overlooking a plummeting green valley. This was what we had been waiting for. The sight was unparalleled. 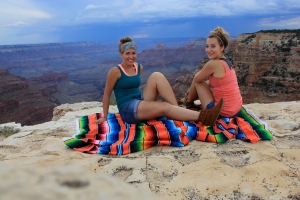 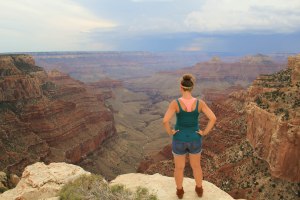 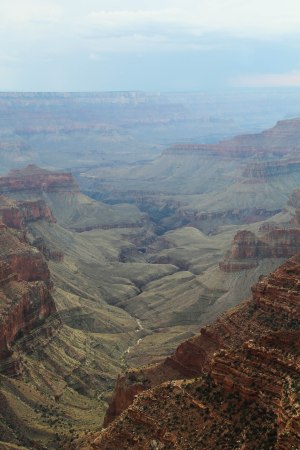 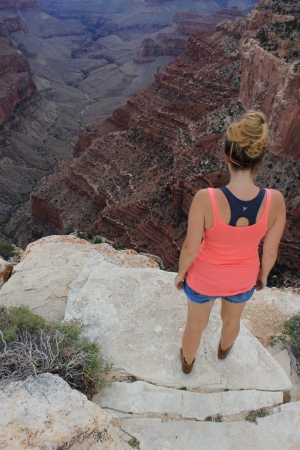 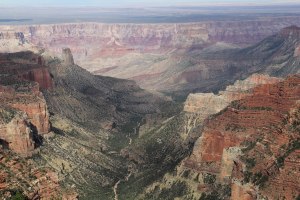 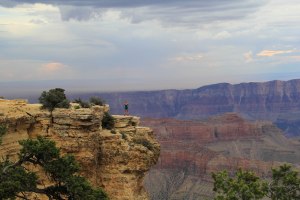 Rhyan being adventurous over the drop! ^^^

While we were there, we struck up a conversation with a nearby photographer (check out his website here – http://www.pbase.com/sedonamemories) who explained to us that where he was camping afforded matchless views of the canyon in a secluded area. Lightening across the canyon changed our sunset plans, but upon returning to the car, we found an invitation left on the window. 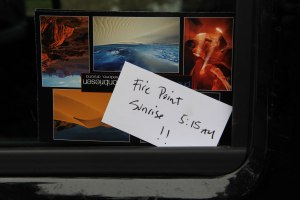 So at 4am we threw on our sweaters, jumped in the jeep, and hightailed it in the darkness, bumping down dirt paths and fire services roads, riddled with pot-holes and unavoidable standing water leftover from the previous nights torrential rain. The Jeep’s first time in 4WD. We were sweating and hyper when we pulled up to Fire Point at 5:15, much to our new friends’ surprise that we had come at all. We had made it. We snapped a few pics though it was a hazy morning, but got some invaluable photography advice from our new friends. 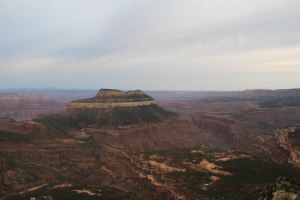 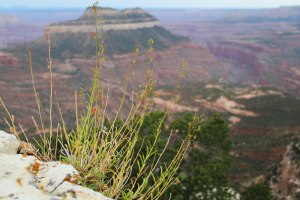 It was an awesome experience that we certainly won’t forget and made for a fantastic way to start the day.

After a quick but joyful stop for breakfast at the campground diner, we bid the GC goodbye and headed out towards Zion, Utah. 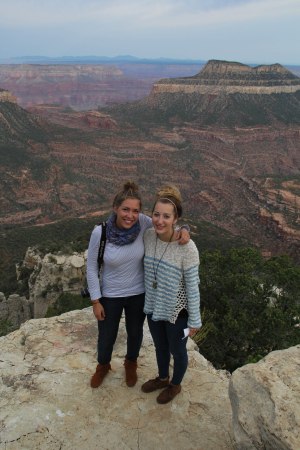 Thanks to Derek von Briesen for the photo over the canyon ^^^

The Grand Canyon actually wasn’t really what we expected it would be. But we were not disappointed. The friends we made, the sights we saw, and the experiences we gained far surpassed what we were even hoping for. So many great memories from just a few days of camping!! We can’t wait to visit it again some time in the future.

A few words of advice – the North Rim is gorgeous, but do take the time to drive up to Angel’s Window. And maybe even brave the daunting roads with 4-wheel drive to camp in the backwoods of Fire Point. Also, take the time to make friends with the people you’re around. You never know what invitations you’ll get, what stories you’ll hear, or what you’ll learn. It’s well worth it. Farewell, GC! We’re on the road again!

*we do not encourage such behavior…. actually, yes we do